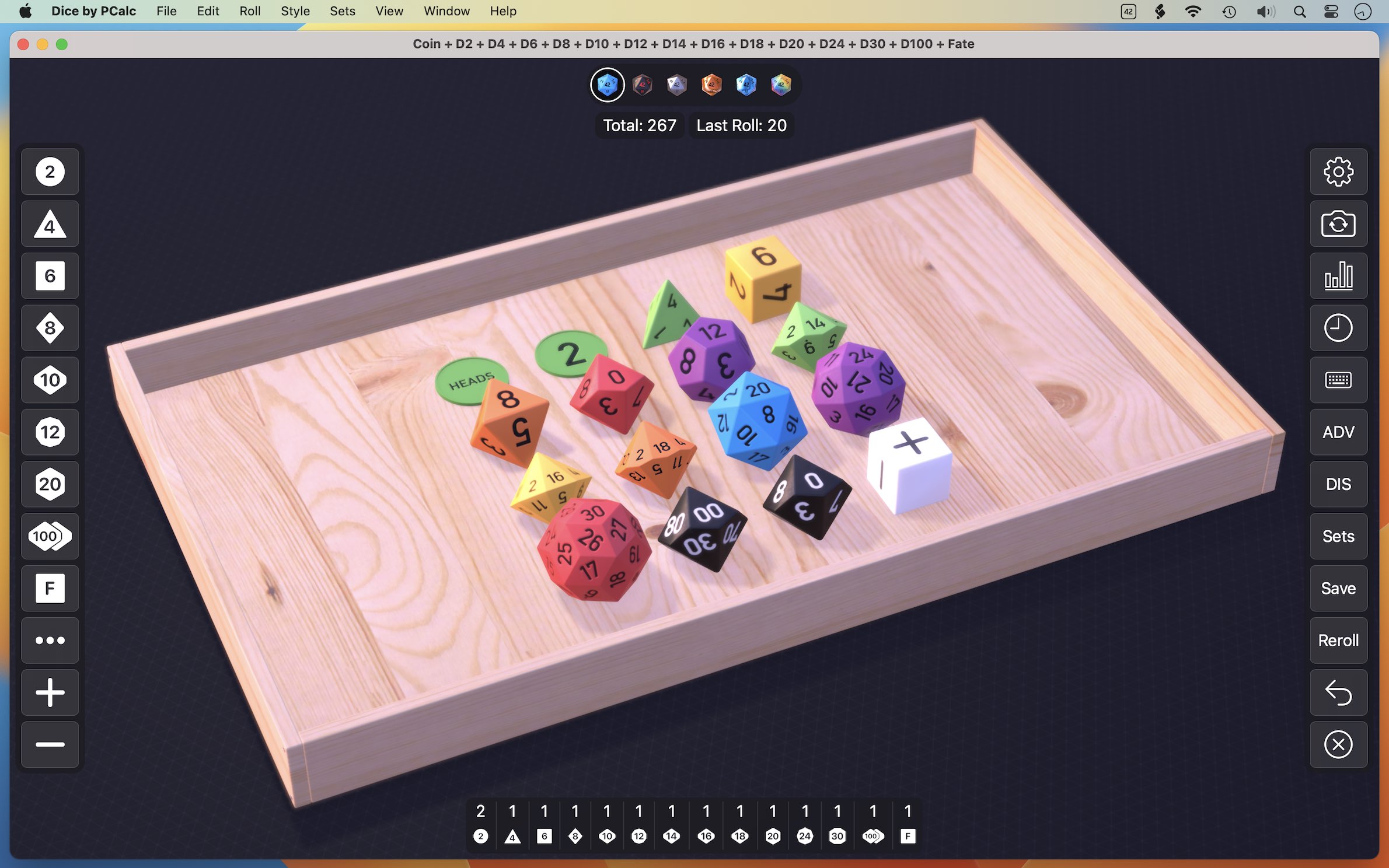 They see me rollin'

Dice by PCalc, is a physics-based simulation of polyhedral dice for use in tabletop role-playing games with dungeons and/or dragons.

It runs on an iPhone, iPad, Apple Watch, and Apple TV. A separate version is also available for the Mac.

Featuring near-photorealistic 3D graphics, it comes with a variety of gorgeous dice sets. It even has a photo mode! Throw multiple dice with advantage or disadvantage, and any given modifier, and the app will automatically calculate the correct total.

You can save named presets to quickly roll the attack of your favorite sword, or figure out exactly how much damage your bard took from those seventeen giant rats. Flick dice to fire them across the screen when the numbers don't go your way.

Create custom dice with any text or emoji on the faces, or import your own images, and easily share your dice with friends. You can even create custom roll functions, such as rolling four dice and dropping the lowest value, or automatically rerolling any ones.

Supports split screen and slide-over on the iPad, so you can put it alongside your other RPG apps, and speech synthesis that can read out the list of dice and the results. It even has an AR mode.

The ideal app for every member of your party!

Click on any of the images to see a bigger version.

You can buy Dice by PCalc on the App Store by clicking the button below:

It costs $1.99 in the US, price varies in other countries. It's a (mostly) universal app - one purchase will work on iPad, iPhone, Apple Watch, and Apple TV.

While it technically runs on an iPhone 6S upwards, it definitely prefers the graphical prowess of a iPhone X or later. On the iPad side, an A10 processor or later is recommended. A Series 4 watch or later is similarly recomended.

Dice by PCalc for the Mac is available on the Mac App Store by clicking the button below:

It requires macOS 11 or later, and supports both Apple Silicon and Intel Macs.

Currently, Apple does not allow developers to merge two existing apps together into a universal purchase, so this is a separate purchase of $1.99.

If you have any problems or questions, mail me at:

and I'll do my best to help.