PCalc is ideal for scientists, engineers, students, programmers, or indeed anybody looking for a feature-rich calculator for the iPad, iPhone, or Apple Watch.

It includes an extensive set of unit conversions, a paper tape, an optional RPN mode, engineering and scientific notation, as well as support for hexadecimal, octal and binary calculations. 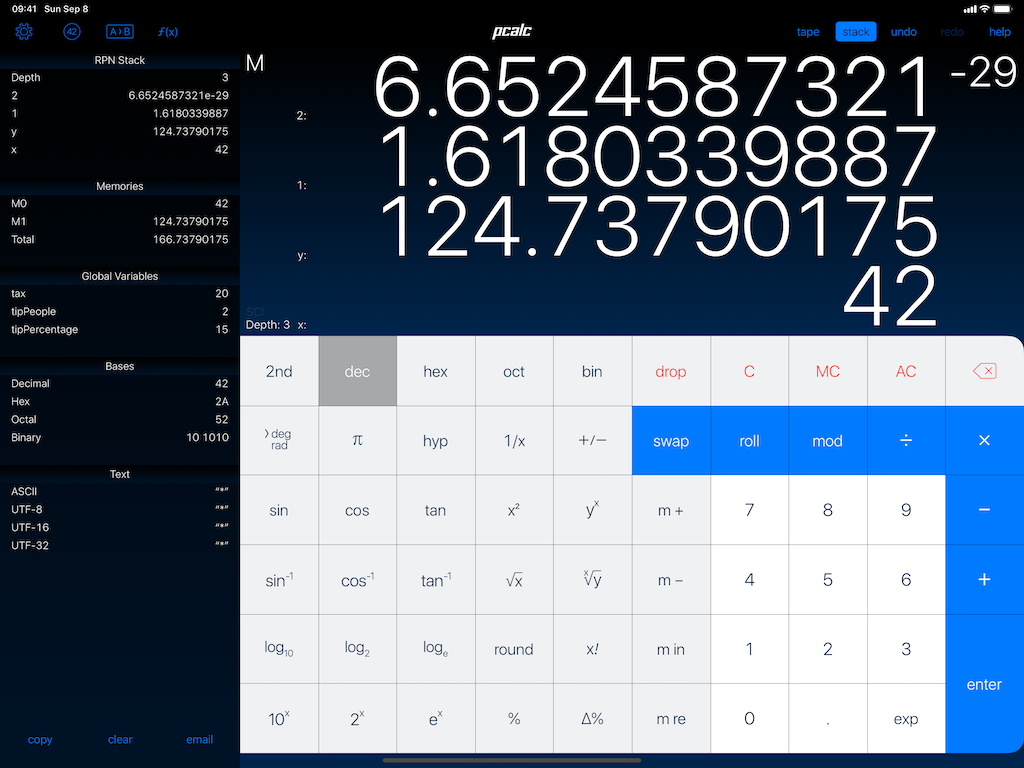 It's PCalc at your fingertips!

Based on the popular calculator for the Macintosh, PCalc has been redesigned from the ground up to give the best handheld experience.

Click on any of the images to see a bigger version. Download a press pack of full resolution screenshots here (34 MB).

You can buy PCalc on the App Store by clicking the button below:

It costs $9.99 in the US, price varies in other countries. PCalc is a universal app - one purchase will work on iPad, iPhone, and Apple Watch. PCalc requires iOS 10 or later. The Apple Watch app requires watchOS 3 or later.

PCalc Lite is a fully functional and free taste of our popular scientific calculator for the iPhone, iPad, and Apple Watch. You can download it from the App Store here.

In the continuing absence of demos or trial periods in the App Store, the idea behind PCalc Lite is to provide something useful and free that's better than the Apple calculator, but which will also drive interest in the full version. PCalc Lite is a great calculator, but PCalc is even better!

You can now purchase all the extra features from the full version of PCalc from inside PCalc Lite. Buy them individually, or buy everything.

What other people have been saying about PCalc: