This page is the one to watch for all the latest news and information about PCalc for the Apple TV.
Follow me as @jamesthomson on Twitter or read my developer blog for more.

I think I forgot to document the updates for the last couple of minor versions, but then, does anybody care about the Apple TV version aside from me? Prove me wrong!

Help! I'm being held prisoner in a software factory! Ok, I'm not. But I don't think anybody will ever read this.

Added support for tvOS 13, and added a new dark theme.

Just a small update to mainly fix some bugs before starting the big push for Apple's OS updates in the autumn.

We also have some new t-shirts and limited edition pins on our store, featuring Pascal, the PCalc panda mascot. Check them out here.

Just a small update to fix a bug with operator precedence and powers.

If you are lucky, you can also find the castle of the Panda King...

Added an option to display SI unit prefixes in Engineering mode, as well as grad support for trig functions.

Also added breakfast cereal and pandas in the About screen. And you think I'm joking...

Added more display options, and up to date with iOS. There's also now music! I don't think anybody reads this page, I could say whatever I want here.

More fixes that bring the core code up to date with the iOS version. It's also now free!

Fixed a few more bugs, but also added achievements and leaderboards to the About screen.

Fixed a few bugs, but also added "Level 2" to the About screen, on the Apple TV 4K. Look for the golden banana!

Another small update to bring the core code in line with PCalc 3.6.3 on iOS.

There's a small 1.1.1 update out today - it add an option for improper fractions, and brings the app up-to-date with PCalc 3.6.1 on iOS.

This release adds support for tvOS 10, including an automatic dark theme option. There's also a new "Fraction" display mode that shows the closest fraction for the current decimal result.

You should get the new version automatically, but you can also search for "pcalc" on the store to download it. New versions are also available for iOS 10, watchOS 3, and macOS Sierra.

Hope you like it. Get in touch at @jamesthomson or send me an email!

The first thing you'll notice are the new icons, designed by Frank at grafiksyndikat.com. I've unified the design of all the icons across all the different platforms PCalc runs on. The old icons were gettng a bit tired and didn't fit in as well with the OS, especially on the Mac, and these are modern and easily recognisable.

This release also brings a number of fixes and improvements, like the ability to specify E notation for the main display rather than using superscript numbers, and it makes the behaviour of the delete key more sensible when you are dealing with decimals and exponents.

It also brings the core code up to date with PCalc 3.5.3 on iOS. The full list of changes is here. Hope you like this update!

Love or hate the new icons, let me know what you think at @jamesthomson or send me an email!

There's an update available now which adds full game controller support! And not just letting you navigate the existing UI with a controller, it has a whole new slick circular UI which you operate with the joystick.

Are these ∏ menus?

To get it, just search on the Apple TV for "pcalc". Hope you like!

PCalc is now available for the Apple TV!

Yes, it's PCalc for the Apple TV. It's optimised for use with a remote and has many of the features from the parent iOS and Mac apps including an optional RPN mode, multiple layouts and themes, and full speech support.

It's currently only $1.99 in the US - the price varies in other countries, but similarly low. It doesn't have every feature yet - no tape or unit conversions for example - so I've priced it appropriately for now and I may increase the price as more things get added. I had consider making it a Universal Purchase with the main iOS app, but because you can upgrade PCalc through an in-app purchase in the free PCalc Lite as well, that would have excluded those people from getting hold of it.

So, the fairest thing to everybody - and fair to me, the developer, as well - is that I've made it a standalone app.

To buy a copy, just search on the Apple TV for "pcalc" - select the icon that appears and it will take you directly to the App Store page. 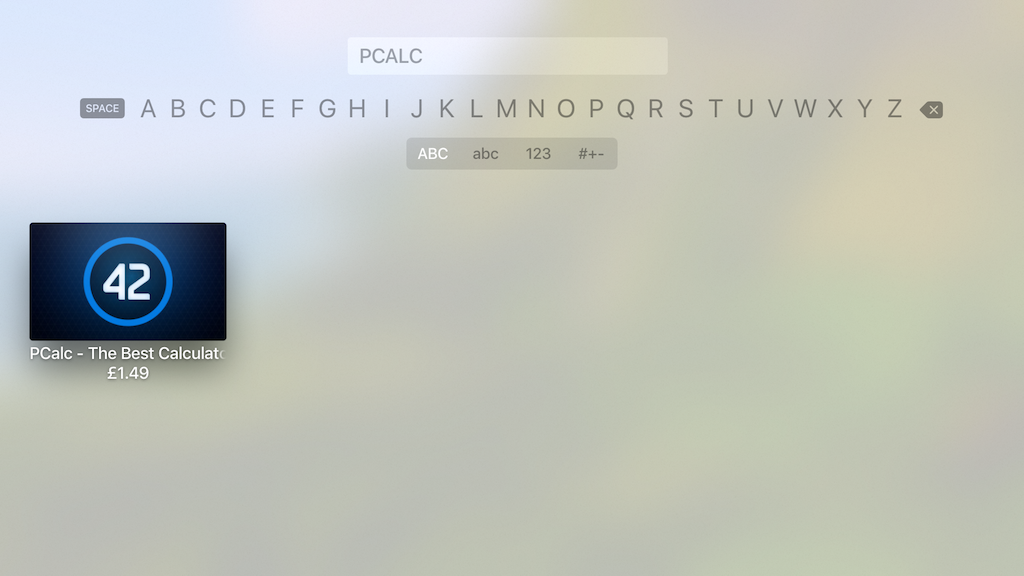 Let me know what you think and what you'd like to see added next - I'm always open to feedback and feature requests!